Do you think these while eating a prosciutto and buffalo mozzarella sandwich with just a hint of pesto aioli? 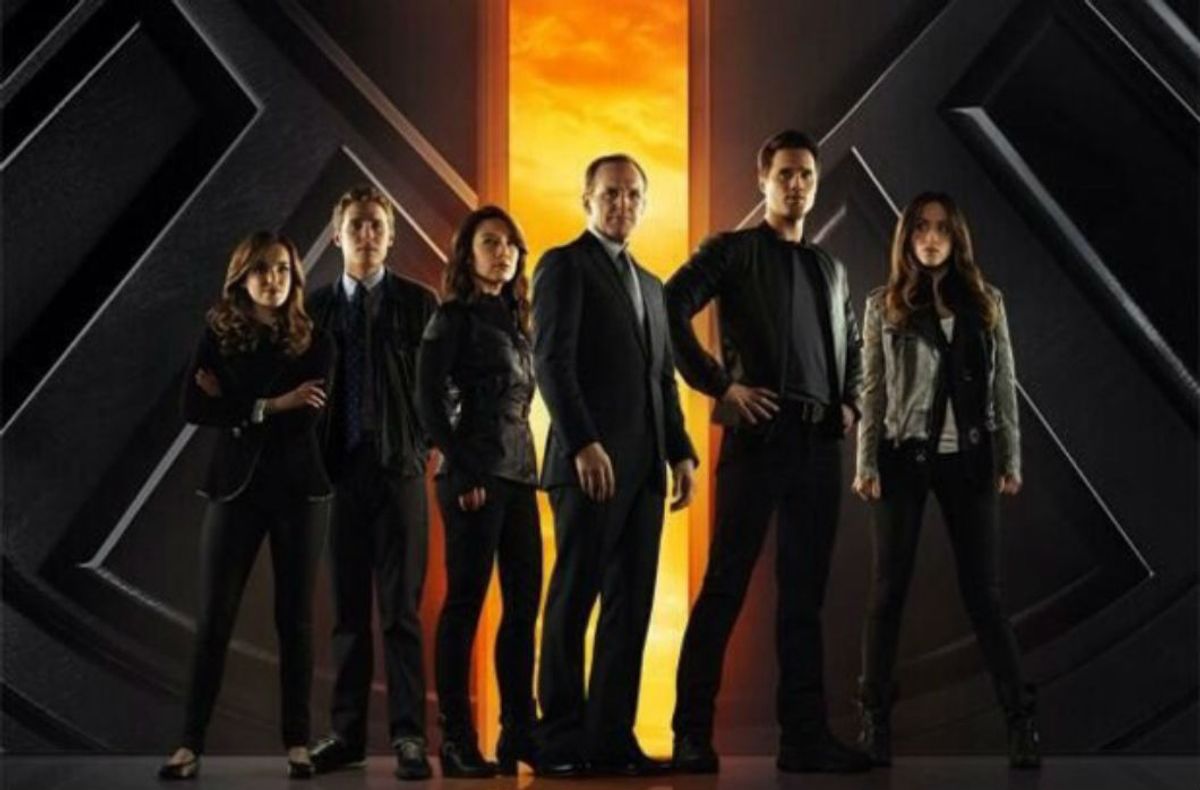 This week, Marvel's Agents of SHIELD premiered its 100th episode. Throughout its five seasons, the show's fans (a small but active fanbase) have stuck with the show through thick and thin, experiencing the team's tragedies and triumphs as if they were their own. And no matter what type of fan you were, you were sure to have had at least one of these thoughts at least once throughout the show.

If you don't think FitzSimmons is cursed at least once every season, has that season really happened?

It's not like we haven't waited FIVE SEASONS for it.

In season 1, it was Skye. In season 2, it was Daisy. In season 3, it was Quake. And Mary Sue Poots fit in there somewhere.

5. "THEY DID IT THEY FINALLY DID IT FITZSIMMONS LIVES"

It only took them being stuck at the bottom of the ocean, trapped on another planet, forced apart by a psychopathic robot, sucked into an alternate reality, and being enslaved by a fascist alien eighty years into the future. Not that that's....a lot or anything.

You might think he's joking, but once you get to season four, you really can't see a thing. Just wait until they go outside. That's the show. #agents of bad lighting

7. A shotgun ax would be really useful RIGHT ABOUT NOW!

It only took Mack a couple of seasons, but the shotgun ax meme eventually became a real thing. Never give up on your dreams.

He's a dork. But he's the team dork, so it balances out, y'know?

Lance Hunter, resident asshole. Still wonder why he married Bobbi to begin with.

We're all Fitz at some point.

We understand that something has happened. But it was a stupid thing that happened and we're electing to ignore it.

It's too catchy not to sing out loud.

Hell hath no fury like a SHIELD fan being forced to wait on haitus.

14. How many fucking Keonigs are there even?

One got murdered in season one. Definitely happened. But we still have no idea how many there actually are.

Didn't matter if you said it in glee or in annoyance, you still said it.

In this case, it's 2018 and I still firmly believe he's in a SHIELD basement somewhere.

"Sounds pretty right to me." NO LINCOLN THAT IS NOT HOW YOU DIE NOT FOR DAISY. (If you weren't an emotional wreck after this I'm not sure what to say.)

It's an unspoken rule of the team: Don't. Touch. Lola. Don't touch Coulson's car and you'll be fine.

Honestly, Elena Rodriguez is a treasure. Even more so with Mack. They're adorable together.

She's already had two traumatic relationships! All Daisy needs is a hug!

Nobody tried to die for each other, no one's significant other was in danger...there was far less drama.

Melinda May has probably seen the most out of any of them. Give the poor woman a break.

NO one has glo'd up better than Leo Fitz. No one . He used to be this scrawny little Scottish engineer, but throw in some aphasia and the love of his life being whisked away to another planet, and boom! We have a hottie.

And yet Leopold Fitz is still one of the biggest dorks to exist. What an icon.

All of them go and do that stupid self sacrificial thing! THEY DON'T NEED TO DO IT!

Whether you sincerely appreciate their friendship or ship them as a couple, Skimmons is great for everyone!

Number one, she said this. Number two, she forced FitzSimmons apart. Number three, she tortured May and put the team into an alternate reality where she rules the world. She can really eat a shoe.

Literally. All this boy wanted was a monkey. It was the running joke for literally three seasons. Possibly four. And he always looked so sad when Coulson said no. (Or is that just in my fanfic?)

Get yourself more of that cinnamon roll. He had like, three episodes and never showed up again. Where is he??

They're all pretty. It's impossible to choose.

29. Mama May and her ducklings, omgggggg

May may not act like she's a mother duck, but she'll sure fight for her kids like she is one.

Would kill to even just be able to do a backflip, amirite?

31. Why did I see this plot twist coming?

Probably because it happened a couple of seasons ago. (Note: this occurs to the salty SHIELD veterans only.)

Sure, they fought, and sure they were just a little bit toxic, but in the end, they were kickass and hilarious and that's what matters.

33. Just let the team be together, please.

They couldn't even get pie without being accosted by someone.