"It's the only life you've got, so you gotta live it big time!" 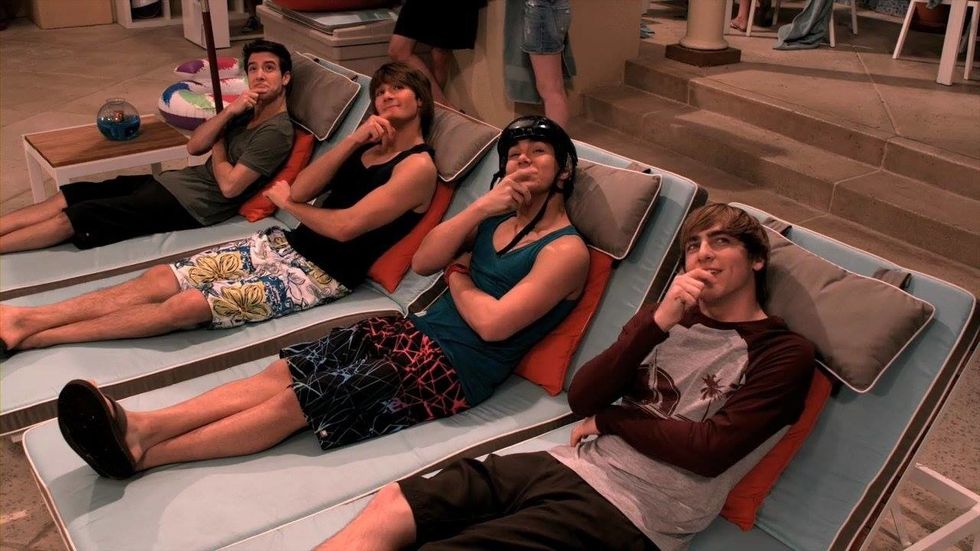 If watching Teen Nick was a staple of you middle school through early high school years, then you've inevitably known of BTR and for the some, the show became your life. The characters, The Palm Woods, and the perfect pairing of sound effects to different scenes made this TV show and these boys more and more lovable by the second. Unfortunately, the antics of Kendall, James, Carlos, and Logan came to a halt when Nick did not renew the show for a fifth season, but luckily, all episodes are available to stream on Hulu. But even then, I'm sure all Rushers, myself included, really wanted to know what the future held for the future of these four boys and as a band.

With too many pros outweighing the cons, here's why BTR should've continued all those years ago.

Their childish antics never got old.

These four music-loving hockey players from Minnesota never lost touch with their youth, and the natural humor because of this is probably a big reason why Rushers continued to watch as much as they did. Each of the guys exemplified very different personalities, but when it came to backing each other up in times of trouble, they got through it the best way they knew how: doing it like nobody was around. These boys always knew who they were as a group and that identity made their craziest adventures that much more memorable for the band and all viewers included. Their "forever young" outlook has kept this show very near and dear to my heart, even 6 years later.

OK, honest opinion: if not totally for the guys, people probably kept watching for the mere reason of BTR's songwriter and manager, Gustavo. Easily stressed out, temperamental, and a very accomplished musical icon, Gustavo provided many laughs and maintained the show's light-hearted tone with his flair, random outbursts,and unbreakable bond with his monkey dogs. He pushed the guys to be better all the time, and though he denied it time and time again, Gustavo is very thankful for BTR's presence in his professional and personal life, even calling them his good luck charms! He was and forever will be loyal to these boys, as they have always done the same for him.

The way they teamed up together to tackle any sticky situation.

These boys have been fiercely loyal to each other since the beginning, and their scripted adventures are a testimony to this. They came to LA together, and that's exactly how they would handle every day after that: together. Their camaraderie was inspiring to many, and always proved to everyone that nothing would tear these boys apart. Moments like this had me cackling, and without them, it's just simply not the same.

They did duets with Miranda Cosgrove AND Snoop!

From the episode, "Big Time Christmas", this special featured two amazing artists, resulting in seriously flame tracks. Both celebs were so authentic, which helped made the show feel very real and delivered an interpersonal, honest, relatable, and down to earth tone for the audience in order to enjoy it that much more. As almost every single Christmas special does, BTR emphasized that being "home for the holidays" checks off any list. The guys made every effort to catch their flight to Minnesota, but in the end, things didn't work in their favor, resulting in staying in LA at the Palm Woods-but it ends up feeling just like the original home back in the Midwest.

Easily one of the sassiest characters of the show, Katie Knight often surprised the guys and nearly everyone around her with her wit, persuasive acting, and impressive knowledge of making money in show business as a preteen. Her actress, Ciara Bravo, portrayed a very (wannabe) independent girl with a bright mind and a daring perspective on life. BTR did a great job of including strong female roles in the show, including Katie, Mrs. Knight, Jo, Kelly, Camille, and of course, The Jennifers.These ladies didn't need no man, and even if a few of them did have one, they did a great job of demonstrating to younger fans that you can be in love and still a boss!

Since the beginning of their stay at The Palm Woods, Bitters has also kept his eye ought for the guys in their apartment 2J. However, though his busts and attempts to get them evicted say otherwise, Bitters was always keen on getting involved in their shenanigans and loved to use money as an incentive to getting his way. Especially close to Katie, the two were usually pictured as teaming up on adventures, placing bets, or leaning an ear on some gossip that was floating around. Bitters was a very lovable character and Rushers always rejoiced when the guys beat him in his efforts to kick them out!

Carlos' relentless pursuit of The Jennifers.

In the show, James and Carlos were depicted as the two guys of the bands without girlfriends, and both were constantly in pursuit. Carlos is shown to have a lot of struggle, and though he knows his chances are slim, he always made an attempt in hopes that one of The Jennifers, three snooty Hollywood style sisters living at The Palm Woods, would take a chance and go out with him. James, on the other hand, had a lot more knowledge and expertise with girls and had to come to Carlos's rescue in order to prevent him from making a fool of himself or scaring a girl away. Carlos' efforts were very impressive, and actually did land him a prom date with brunette Jennifer and another dinner date with curly Jennifer.

They never forgot where they came from.

When BTR first came to be, Kendall, the leader of the group, made it very clear to Gustavo that it would be all four of them as a singing group or none of them at all. Throughout the show, they always described their identity as "four hockey players from Minnesota with a passion for music and life", and this could not have been more true. Hockey stays with them even in LA, and when the guys got "Hollywood Fever" and tried too hard to acclimate to the new pressures of Hollywood culture, Kendall reminds them of the ice and cold of their roots with a snowball "ice" fight in Palm Woods Park, and things go right back to how they should be. They were loyal, crazy, passionate, and humble, and it stuck with them until the very end.

Apart from just being an addicting and funny show to watch in our downtime, Big Time Rush taught some very important life lessons as well. Although life has its twists and turns and will inevitably change over time, your roots will always be a part of you and family, both given and chosen, is everything. Anything can change in the blink of an eye, and whether that be for better or worse, you have to live your life out loud and embrace every chance and crazy adventure that comes your way. I've never been a very spontaneous person, but since coming to love BTR, they taught me that sometimes, you need to throw away the game plan and take that chance! Keep your feet on the ground and eyes on the stars, and you might just make it BIG TIME! ;)